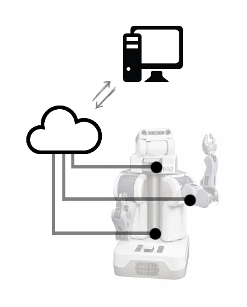 Common industrial robots are all controlled by expesive, high performance controller units using programs stored in memory. Programs are uploaded through a network connection from a computer. All input and output of the robot is connected to the this central controller unit, thus the robot can work standalone effectively.

Anvances in communication technologies reached a level in the 2010s where cloud based robotic solutions became viable. In these cases several robotic processing functions are offloaded to a central server connected to the robot through the communication interface. Tipically, these are computationally expensive tasks (e.g. image processing, pattern recognition). By offloading them to a server, the performance demand on the robot controller is lower, thus lowering the price. This scenario is viable only when the delay caused by communication is tolerable. However, advances in mobile communication mean lower and lower delays in the future:

By analysing this trend we examined where de robotic platform converge. This is a classical, isolated robot, controlled by its own, integrated circuitry, that can be reprogrammed from a computer:

In recently appearing cloud based robotic solutions control is based on integrated control circuitry that also communicates with a server through the network. These arising communication needs also strengthen the above trend.

As indicated by the trend more and more functions could be offloaded to network connected servers in the cloud. The next figure shows what extreme scenario this trend could lead to: all functions offloaded to servers except communication. All the parts are communicating through the network, and there is no need for local control circuitry, control is in the cloud:

Could this trend be sensibly followed to this extent? What advantages could such a development provide us? We have tested it in a laboratory robot, and these are our experiences:

Replacing local electronic control circuitry with control software brings faster development cycles and reduced development costs
The simple, identical motoric and sensory modules bring lower material and maintenance costs
The network connected modules are controlled by software, the boundaries of the machine become less defined, ad-hoc machines could be defined in software
Due to software control the robot can be easily integrated into existing control platforms
All steps of the control process are easily accessible, fault free operation could be mathematically guaranteed

Any cookies that may not be particularly necessary for the website to function and is used specifically to collect user personal data via analytics, ads, other embedded contents are termed as non-necessary cookies. It is mandatory to procure user consent prior to running these cookies on your website.